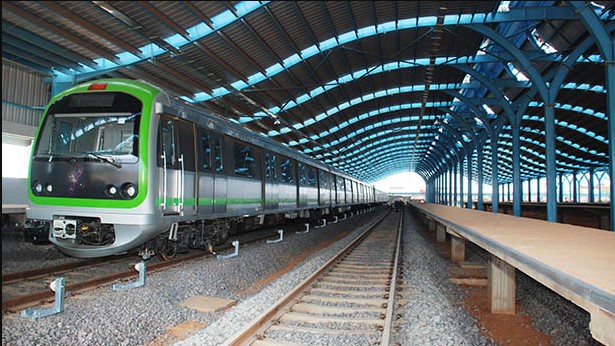 Growth and expansion of cities is a necessity. Doing away with congestion and pollution though is often overlooked. Thanks to the Namma Metro, things are looking much ‘greener’ in Bangalore!

Within just a few years of operation, Namma Metro trains have become synonymous as a quicker, cheaper and most importantly greener way of commute. It has become the most-preferred mode of transport for lakhs of commuters in the city, bypassing the fuel-guzzling cars, slow buses or the more expensive auto rickshaws and cabs.

The improving green potential of the city was verified by a recent analysis of air quality by the KSPCB (Karnataka State Pollution Control Board). A dip in pollution levels was noted along both the Metro corridors. KSPCB’s analysis showed that there was a decrease in air pollution along the North-South route by an average of 8.9 % and an average decrease of 13.3 % along the East-West route.

The 18 km East-West route (Byappanahalli – Mysuru Road) and the 24 km North-South route (Nagasandra – Yelachenahalli) is estimated to ferry about 3.6 lakhs daily and this translates into a massive reduction in dependence on other forms of transport that rely on pollutant fuels.

Thousands of professionals from South Bengaluru have been waiting for the Namma Metro Green Line to open. The now operational Phase I line is a boon for those living in the residential suburbs as it gives great connectivity to East Bangalore (Byappanahalli being the last Metro stop as of now) and to North Bangalore which houses many hospitality and industrial sectors.

When Phase II is complete, it will stretch from BIEC in the North to Anjanapura in the South. This will connect most of the of pristine, residential pockets of South Bangalore to the city centre and beyond.